Yes, I pet a cheetah!  But before I get into that, let me start from the beginning of my amazing adventurous day outside of the city.

I decided to book a “Zipline, Cheetah and Wine” tour through Trips and Tracks SA, a boutique tour agency in Cape Town.  We were picked up around 6:30am by Rashid and were lucky enough to be the only two people on the tour!  So we essentially had a private tour guide for the day.  Rashid was incredible–very personable and knowledgeable about everything African-related!

Before we got to the Zipline Adventure, the first stop of the day, we stopped at the Peregrine Farm Stall, a cafe and shop with some of the best baked goods and lattes I’ve ever had!  Located in Grabouw, on the way to the Hottentot-Holland Mountains, it’s the perfect stop for an early morning pick-me-up.  We also picked up some local honey, since my mom is a honey connoisseur, from the Elgin Valley and Gansbaai.  She later told me that it’s the best honey she’s ever had–even better than Michigan honey!  Peregrine also has plenty of jams, preserves, jerky, etc. for sale.  Next door, they’ve got a cider stall, Everson’s Cider, if you’re in the mood for some local South African hard cider.

Not far from the farm stall is the entrance to the Cape Canopy Adventure, where we did ziplining through the Hottentot-Holland Mountains Nature Reserve.  These unique mountains reminded me of the Scottish Highlands, with its rocky yet green mountains and low hanging fog looming over the peaks.  Rashid also explained to us that the mountain range’s name comes from the story of the fighting between the Hottentot People (the aboriginals, also known as the “Khoikhoi” that hailed from the Western Cape region) and the Hollanders hundreds of years ago.  The Hollanders pushed the Hottentot’s further and further into the mountains after landing in Cape Town.  So much so that the Hottentot people vigorously fought back but never fully regaining their land.  Descendants of the Hottentot people still live in the mountain range and many work still work in the mountains for the Nature Reserve and the Cape Canopy Tour.

After a brief safety review, my dad and I set off with two guides to take us on our zipline adventure.  We were, once again, lucky enough to be the only two in our group, making for another private tour!  Once you are all geared up, a 4×4 takes you on a bumpy ride, also known as an African Massage, to the top of a mountain, where you take a quick hike down to the first platform.  There are thirteen platforms and one suspension bridge, with 360 views of gorges, cliffs and waterfalls.  The platforms hang over the edge of these mountains and the longest zipline run is 320 meters (1,050 feet)!  The rides and views were truly spectacular and our guides were phenomenal.  They were animated and informative, telling us about the local flora and fauna and even riding tandem on some ziplines with us!

Once we returned to the Cape Canopy Offices, we were treated to a Springbok meat pie and salad.  And off we went to our next stop, which was the wine tour.

Just about a 15 minute drive down the road is the Oak Valley Wine Estate.  It’s truly Elgin Valley’s best kept secret.  The grounds are beautiful, with gardens surrounding the property and peacocks wandering around (Kevin is a real gem).  There’s even a pool and restaurant at the wine estate, if you’re feeling hungry or looking to take a dip on a hot day.  Fabio, a sommelier at Oak Valley, gave us a run down on the different wines Oak Valley produces.  Some of my favorites were the Fountain of Youth 2017 Sauvignon Blanc and Sounds of Silence 2014 Pinot Noir.  And the prices were phenomenal.  I ended up picking up a bottle of Sauvignon Blanc and only paid R85, which is just about $7.  I don’t think I can even pick up a bottle of Yellowtail for such a cheap price in the US.  Overall, the price of wine in the country is so cheap–top shelf wine bottles start at $6.  I should’ve gotten more! 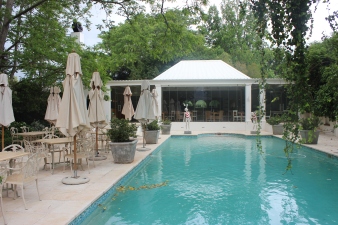 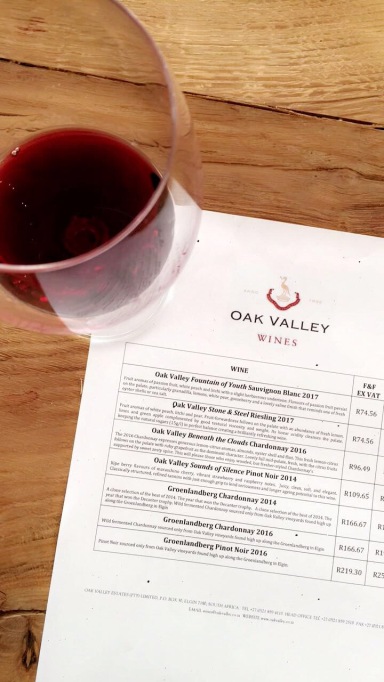 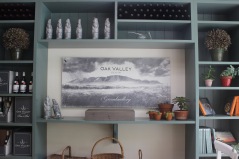 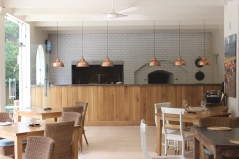 Our last stop on today’s tour was the Cheetah Outreach Center near Somerset West, where we pet cheetahs and learned about animal conservation in South Africa.  We were lucky enough to come on the first day the five month old cheetah cubs were being introduced to the public, so we were actually the first people, besides their handlers, who got to pet them!  They were born in captivity in South Africa and are siblings.  It was so cool to see the difference in their personalities, and it shows us the “human” side of animal emotions.  Zane, the younger boy, was very energetic and wanted to play with his sister, Zeva, who was much more reserved and clearly the dominant one in the relationship. 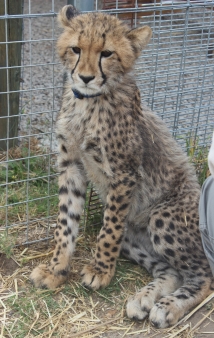 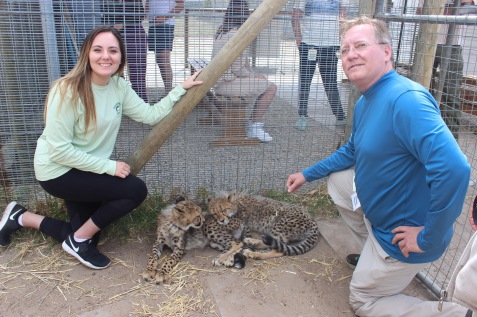 Afterwards, we were led down to Hemmingway’s enclosure, who is a fully grown adult cheetah, and pet him as well.  We learned about his time so far at the Cheetah Outreach Center and about the other adult cheetahs as well.  A quick tour around the facility showed us that they had more than just cheetahs too.  There are servals, caracals, black-backed jackals, bat-eared foxes and meerkats.  In fact, we even learned that the foxes were involved in a love triangle and a fourth one had to be introduced to break up the triangle! 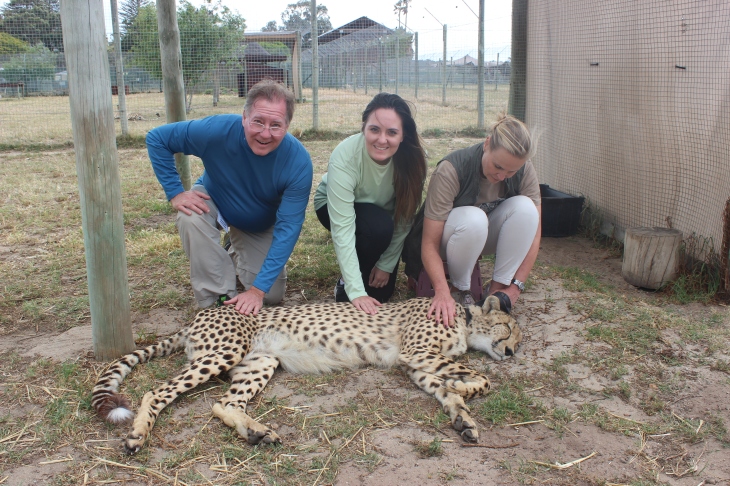 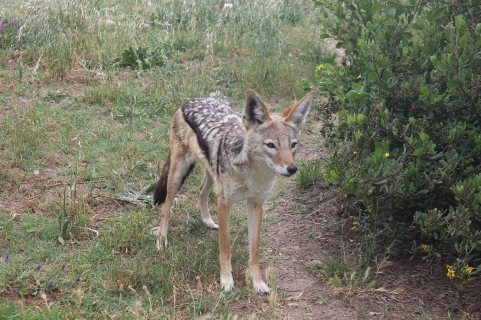 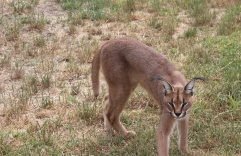 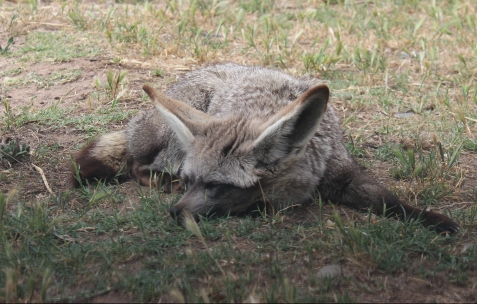 The outreach center also cares and trains dogs for the Anatolian Shepherd Guard Dog Program.  This program aims to train dogs to protect livestock in farms and rural communities, which in turn protects wild cheetahs because farmers are no longer having to kill them to protect their livestock.  Although the program only services South African farmers, it has been for other similar programs with mastiffs and other anatolian shepherds in Namibia.  The programs have been wildly successful and have reduced the depopulation of livestock by 95-100%.  In addition to these two types of dogs, the Cheetah Outreach Center also cares for bloodhounds and dobermans, which used to track and preserve cheetahs around South African farms.

We learned so much about South Africa today, everything from the mountains, flora and wildlife to the wine!  Onto the next Cape Town adventure…